The A  R Rahman foundation aims to create opportunities for students to get involved in outreach through music, by inviting various noted musicians to host workshops and masterclasses all throughout the year. It has led to the development of an active global forum of learning music under noted dignitaries from around the world. 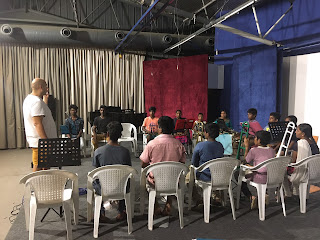 On 11th October 2019, our foundation in association with KM Music Conservatory welcomed Gustavo Subida on a two week visit filled with workshops and masterclasses for the students enrolled in our Sunshine Orchestra Brass Ensemble. The sessions covered the most important aspect of learning any wind instrument that is the breathing technique and how to breath sound while ensuring an effective practice routine. Also, the students learning to play the Tuba and the Euphonium got a chance to have individual sessions with him, with extra tips to improve optimization of their total number of practice hours. Born in Portugal, Gustavo Subida started playing the Tuba at the age of 11 for the local wind band, in his hometown in Northern Portugal. His debut as a soloist happened with the Espinho Classical Orchestra. He then moved to the UK, where he studied at the Royal College of Music in London, and at the Royal College of Music. 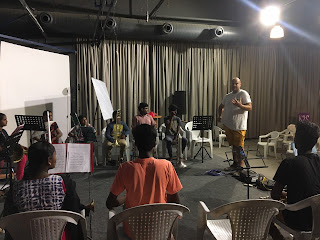 In 2006, shortly before he earned his bachelor's degree from the RnCM, he was appointed principal Tuba with the Estonian National Opera. In Estonia he performed chamber music recitals, & solo recitals. in 2010, he gained a diploma in performing arts, from the Hochschule fur Musik und theater, in Hannover, Germany. Since 2007, he has been the principal Tuba with the Oulu Sinfonia. Subida feels training students across the globe, shadowing across different projects and groups has been useful to him and the students equally; the whole process of reflecting after each session has benefited the students enrolled in our program.
As a signing off note Subida shared his excitement to visit again and was left impressed with the progress these students have made studying under our director of Brass, Lisa Sarasini.
To encourage more such visits by foreign faculties & to make India a hub of such masterclasses, you can check our website out to extend your support in inviting and conducting more workshops.